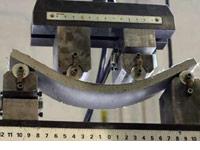 Civil infrastructure , including buildings, bridges, roadways, tunnels, dams and airfield pavements, may be subjected to multi-hazards such as earthquakes, fires, storm surges, winds, projectiles and blast loading. Protection from catastrophic failures of infrastructure due to such extreme loadings cannot be assured despite many decades of research in structural design and materials development. This is illustrated by events such as the 1995 Alfred Murrah Federal Building bombing, the 1994 Northridge Earthquake in California, and the 2005 Hurricane Katrina in the Gulf of Mexico.

Within the concrete technology community, the development of increasingly high-strength (compressive) concrete over the last several decades has given hope for stronger structures. However, there is also increasing recognition that when a certain level of compressive strength is reached, the failure of a structure or structural element will be dominated by brittle fracture in tension. This recognition has led to an expansion of materials property development towards tensile ductility in recent years (see, e.g. Fischer and Li, 2006). This new focus of research and development may provide a rational basis to support the construction of new infrastructure and the rehabilitation of existing infrastructure for enhanced, robust resiliency against multi-hazards.

This article introduces Engineered Cementitious Composite (ECC), which has its microstructure designed from the ground up for tensile ductility. As a result, the material shows high damage tolerance under a variety of loading conditions. After a brief summary of the micromechanics-based design approach behind ECC, highlights of its tensile properties and some recent field applications of this emerging material are reviewed. The article concludes with brief comments on the future development of smart functional ECCs.